MARSHFIELD — Concerned citizens packed Lincoln Town Hall Thursday night for a panel discussion about the potential addition of a fifth pipeline to Enbridge Energy’s current corridor of four that runs through the state and just west of Marshfield.

The amount of crude oil flowing through the largest pipeline in the current corridor, Line 61, has already increased significantly, and it will eventually transport 1.2 million barrels of oil per day. Enbridge representatives say it is not a certainty that a new pipeline will be built. 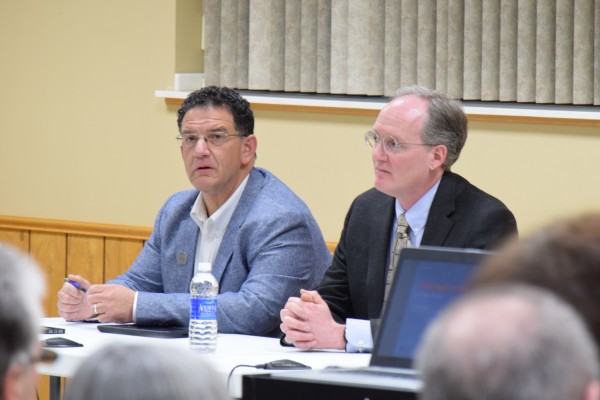 On the left: State Rep. Bob Kulp, R-Stratford, was in attendance to listen to the parties speak and note citizen input.

In the existing corridor, three pipelines transport crude oil from North Dakota and Canada through Wisconsin from Superior to Illinois, and one carries a “diluent” from Illinois north to Canada. The proposed new pipeline could carry as much as 800,000 barrels of crude oil per day and would follow the same route as Line 61. Enbridge representative Mark Willoughby said the project would require “a capital investment somewhere between $3 and $4 billion.”

The current pipelines in total span about an 80-foot corridor underground, and the potential addition of another line has spurred the formation of a local group opposed to the expansion called 80 Feet Is Enough!.

“80 Feet Is Enough! started in a small neighborhood west of Marshfield, Wisconsin in late 2015 after hearing media accounts of Enbridge’s expansion plans. The neighbors had lived through two previous disruptive pipeline expansions and routinely dealt with Enbridge on their properties for investigative digs, pipeline repairs, and even one pipeline spill that resulted in Enbridge buying a neighbor’s home,” according to the group’s website.

Mark Borchardt is a member of the group and a property owner concerned about Enbridge’s potential expansion plans.

“Underneath my property right now flows 1.6 to 1.8 million barrels of oil per day. And if you do the math, that’s about 10 percent of the U.S. oil demand daily,” Borchardt said. “And now Enbridge has approached us about more land for more pipelines.”

Borchardt is worried specifically about Wisconsin’s eminent domain law, which allows “business entities” to acquire private property for their use if it is in the “public interest.”

Enbridge’s current corridor of pipelines runs underneath Mark Borchardt’s property. He is working to oppose the addition of another pipeline to the corridor.

government can take our land with just compensation and for public use only, not for private gain,” Borchardt said.

Members of the panel, including Borchardt, took turns speaking on Thursday night. Joining Borchardt on the panel were Willoughby, Sierra Club Conservation Programs Coordinator Elizabeth Ward, and energy and environmental attorney Paul Blackburn. State Rep. Bob Kulp, R-Stratford, was also in attendance and said that his role was not to express an opinion on the potential pipeline but rather to listen.

Willoughby spoke to the necessity of fossil fuels as a resource for Americans.

“In 2014 the U.S. consumed about 19.1 million barrels of oil per day. Simply eliminating fossil fuels is neither practical nor possible if we want to maintain our quality of life and our economic prosperity,” Willoughby said. “Pipelines are also the safest, cheapest, and most efficient means of transportation for liquids.”

He added that Enbridge is considering a new pipeline “to meet the growing demand for North American-produced crude oil and to better meet the needs of customers in the Midwest and elsewhere.”

Willoughby highlighted Enbridge’s community involvement and donations. Locally, the Marshfield Fire and Rescue Department was recently the recipient of a pickup truck, which was retired from Enbridge’s fleet.

Willoughby also pointed out the safety precautions Enbridge takes as the company tries to prevent spills or accidents, including continuous pipeline inspection and monitoring.

“Safety is the cornerstone of our business,” Willoughby said. “While our record is not perfect, we’re working every day to change that.”

A 2010 rupture in an Enbridge pipeline spilled more than 840,000 gallons of crude oil “into Talmadge Creek, which flows into the Kalamazoo River,” according to the U.S. Fish and Wildlife Service Midwest Region.

“This oil traveled through Wisconsin and then went to Michigan, and the pipeline ruptured there. It was by chance that it ruptured there, and we’re lucky that didn’t happen here in Wisconsin,” Ward said.

Ward also expressed concern over clearing Canada’s boreal forest for the extraction of tar sands oil. She cited climate scientist James Hansen, who said in a New York Times Op-Ed that full exploitation of the tar sands reserves in Canada would mean “game over for the climate.”

“There’s no way to cut down that forest and then extract this oil without leading to more carbon dioxide emissions than our climate can take,” Ward said.